Rec Tek Diving Repair was founded in 1999 in response to many dive shops finding it difficult to stock a large quantity of parts and brand specific tools needed to work on scuba equipment. Most dive shops service only the brands they sell, so they had to send their customers to competitors to have their equipment serviced. Rec Tek solved their problems by having a large quantity of parts for most manufacturers, including service kits and the parts that wear out frequently, in stock. Rec Tek has a large Nuvair compressor with a hyper filtration system to produce "oxygen clean air" and storage banks that utilizes a Peterbuilt “HP Manager”, allowing easy testing of regulators at 500-3500 psi tank pressure. Other testing equipment includes a “Pro-Check” to test the water tight integrity of the 2nd stage, a “Flow Analyzer” that allows the tech to check the regulator’s performance under load, and a Global Instrument Test Chamber that tests the watertight integrity of all dive computers, transmitters, receivers, and air integrated computers after a battery change. By utilizing this chamber, Rec Tek can test alarms and functions to a pressure equal to 300fsw.

Tim and his team of technicians attend repair clinics annually to maintain their certifications and skill proficiency.

Rec Tek is open to the public and performs repairs for local and out of state dive shops, hotel aquariums and state / federal government dive teams. 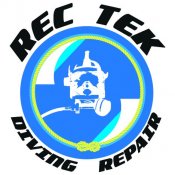